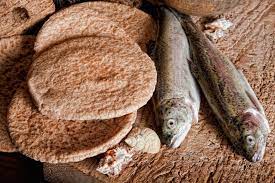 There was a little boy who was excited about the day because he wasn’t going to have to do his regular chores that day. His mother was preparing some food so he went over to look at it. He asked what she was doing. She said since she didn’t know how long they were going to be at the event, she was making a lunch to take with them.3.

She was packing a meal of leftovers: Two fish and five loaves of bread.

He told them of a time when they had heard Him speak in that same area, and pointed out a spot where the sound would carry and thought that might be where Jesus would speak from that day. (All of these details aren’t found in the book of John. This account is also found in Matthew, 14:13-21, Mark 6:30-44, and Luke 9:10-17.)

The mother saw some friends and decided to go sit with them for a while. Then another man walked up and introduced himself as Andrew.

The boy was especially excited because he had been given the special responsibility of carrying their lunch. Andrew saw the bread and commented that the boy had come prepared. The boy said they even had enough to share if he wanted to.

People were coming that day because word of Jesus’ miracles had spread. They had heard about Him turning the water into wine, and about the healing of the nobleman’s son.

They knew about the man at the Pool of Bethesda who had tried and tried to get to the water as it was stirred so he could be healed but had never succeeded. Then Jesus told him to take up his bed and walk, and he was instantly healed.

The people continued to arrive throughout the day. They brought their sick and Jesus began healing them.

Others were coming to hear Jesus teach, so they began to gather on the hillside.

At one point, Jesus began to teach. The people were so enthralled that they didn’t realize the time, and that they hadn’t had lunch yet. Some of the disciples wanted Jesus to send the people out to the town so they could get some food.

Jesus turned to Philip, and there came a possible crisis point of belief.
There are times in life when you need to make a decision, and you need to believe. If you don’t believe or act on your belief, you’re not going to get the blessing that could be there.

Jesus asked Philip, “Where can we buy bread, so these people can eat?”

The Bible says that Jesus asked Philip this because He wanted to test him. Philip told Him that there wouldn’t be enough money if they had 200 days of wages, to feed all those people.

Another crisis point: Andrew had some information. He didn’t think the information would solve the problem, so he debated as to whether he would even say anything to Jesus or not. He decided he would. He told Jesus about the boy with the 2 fish and 5 loaves of bread.

The third possible crisis point came when Jesus told the disciples to do something. They were focused on the impossibility of the situation. However, they had been around Jesus long enough to know that they needed to do what He said.

Many of us would have thought that this was an impossible situation.
The disciples realized that Jesus was not going to send the people to the villages to purchase food. They had the 2 small fish and 5 loaves of bread, and Jesus was telling them to get the people ready to be fed.

Jesus told them to instruct the crowd to gather into groups of 50 or 100. That’s how we know that it was 5,000 men that were there. That didn’t include the women and children.

Then Jesus did the impossible.

John 6:1-15
After these things Jesus went across the Sea of Galilee, which is the Sea of Tiberias. 2 And a great crowd followed Him, because they saw His signs which He did for the sick. 3 Then Jesus went up on a mountain, and He sat there with His disciples. 4 Now the Passover, the feast of the Jews, was near.5 When Jesus looked up and saw a great crowd coming to Him, He said to Philip, “Where shall we buy bread that these may eat?” 6 He said this to test him, for He Himself knew what He would do.7 Philip answered Him, “Two hundred denarii worth of bread is not sufficient for each of them to receive but a little.” 8 One of His disciples, Andrew, Simon Peter’s brother, said to Him, 9 “There is a boy here who has five barley loaves and two small fish. But what are they among so many?” 10 Jesus said, “Make the people sit down.” Now there was much grass in the place. So the men sat down, numbering about five thousand. 11 Jesus then took the loaves, and when He had given thanks, He distributed them to the disciples, and the disciples to those who were sitting down; and likewise, they distributed the fish, as much as they wanted. 12 When they were filled, He told His disciples, “Collect the fragments that remain, that nothing may be lost.” 13 So they collected them and filled twelve baskets with the fragments of the five barley loaves which were left over by those who had eaten. 14 When those men saw the sign which He had done, they then said, “This is truly the Prophet who is to come into the world.” 15 Therefore, knowing that they would come and take Him by force to make Him king, Jesus departed again to a mountain by Himself alone.

They recognized that Jesus was the Messiah, but they still had the worldly mindset that He was going to take them away from the authoritarian government.

He was there for so much more. He was going to take care of what would happen in their lifetime and more than just that day.

Although it doesn’t say it in these passages, I believe it was like it was when He spoke to the disciples on the road to Emmaus, (Luke 24:13-35) speaking to them from the Law and the Prophets. He showed how those scriptures pointed to Him.

They recognized Him as the Messiah, but He also knew that they were going to try to set Him as a political king. That is when He left.

There were physical healings on that day, but there was something that every member of that crowd experienced.

Those that did not need physical healing saw a miracle take place with their own eyes. It wasn’t hearsay. Over 5,000 men and their families saw this great miracle that Jesus performed on that day and they knew He had to be the Christ.

Back to Everyday Life

After they left, they had to go back to normal life.

We know that life isn’t always sweetness and roses. Sometimes, even among the roses, there are thorns. Sometimes there are difficulties. Their lives were no different. They had their share of problems, too.

But because they became aware of Christ and believed in Him, the scripture says that the ones who believe in His Name will be saved. Regardless of how difficult their lives may have been after that day, if they believed in Him, eventually, they wound up in Glory.

Sometimes you and I have difficulties. We may have happiness in our lifetime, or we may not. But one day, we will be with the Lord forever.

First of all, evaluate the situation. Look at every scenario that you can think of, every nook and cranny.

But it may be during the time that something looks impossible that God wants to do something unusual.

Secondly, use what you have. They had 2 fish and 5 loaves.

When the Israelites were leaving Egypt and came to the Red Sea, they didn’t know how they would get across. God told Moses to lift his rod over the water and the sea parted and the Nation was able to cross on dry land and escape Pharaoh’s army. (Exodus 14)

Exodus 17:8-16 talks about the battle against the Amalekites. Moses went to the top of a hill and held his arms out, holding the rod in one hand. His arms began to grow tired, so he lowered his arms.

When he did that, Israel began to lose the battle. When his arms were raised, they were winning. He sat on a stone and a man got on either side of him to support his arms.

Use what you have. It might be an impossible situation, but God can take a little thing and make something big out of it.
There’s a song written by Kittie L. Suffield that I want to share with you.

In the harvest field now ripened
There’s a work for all to do;
Hark! the Master’s voice is calling,
To the harvest calling you.
Little is much when God is in it!
Labor not for wealth or fame;
There’s a crown, and you can win it,
If you go in Jesus’ name.
In the mad rush of the broad way,
In the hurry and the strife,
Tell of Jesus’ love and mercy,
Give to them the Word of Life.
Does the place you’re called to labor
Seem so small and little known?
It is great if God is in it,
And He’ll not forsake His own.
Are you laid aside from service,
Body worn from toil and care?
You can still be in the battle,
In the sacred place of prayer.
When the conflict here is ended
And our race on earth is run,
He will say, if we are faithful,
“Welcome home, My child—well done!”

Little is much when God is in it. Use what you have. The little boy gave his lunch and he saw Jesus multiply that.

Use what you have, and then watch for God to work.

You don’t have it figured out, how it will work. Sometimes it will work out in a way you don’t expect. People in financial trouble will get an unexpected gift from someone. Sometimes they promise to do that for a few months.

Watch for God to work.

The fourth thing is to continue to trust God. The day on the hillside was a wonderful day. God had provided them with a great supper out of a little boy’s lunch of 2 fish and 5 loaves of bread.

But, everyone had to go back home and face life again.

The wonderful song, I Remember the Fish, written by Rodney Griffin, expresses this beautifully.

I don’t know what you’re going through, or what situation you may be facing. But I believe that if you look back on your life, you will remember a time when you were in a situation that you didn’t know the way out of, and God pulled you through it.

This was the Prophet. He was the Christ.

We may have 100 years of tragedy and suffering or oppression. That’s just a drop in the bucket compared to eternity in Heaven.

When you find Jesus Christ, the Lord comes into your life, and for eternity, you will be in Glory and it will be worth it all.

Remember the fish, but trust the Prophet.