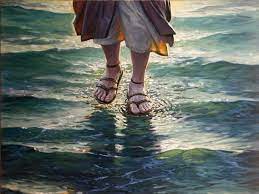 Recently, I went fishing with a couple of my friends.  While on the boat, one of my friends said he was thirsty and would go get himself something to drink.  He stepped out of the boat, and, looking very tall, walked to the shore to get his drink.

The second friend decided he was also thirsty and going to go to shore to get a drink.  He, too, stepped over the edge of the boat and walked to the shore.

I decided I would step off of the boat too.  I promptly sunk up to the bottom.  The two friends on shore turned to one another and asked, “Do you think we should have told him where the stones were?”

Half Full or Half Empty?

I was thinking about the pessimist and the optimist.  They were both farmers.  One day it was raining.  The optimist said to the pessimist, “Look at the wonderful rain.”  The pessimist replied, “It may be good for now, but I hope it quits before too long, or it will drown my crops.”

A while later, the sun was shining.  The optimist said, “The sunshine is just fantastic!”  The pessimist said, “I hope my crops don’t burn.”

The optimist decided he was going to do something to get the other man to be positive.

The optimist thought, “I’ve got him now!” and he turned to the pessimist and asked, “What did you think about that?”

The pessimist answered, “Your dog can’t swim, can he?”

A missionary was visiting a tribe in Africa.  He told the chief the story of Jesus walking on the water.  The chief told the missionary that it was impossible and he wouldn’t believe until he could find proof, although he didn’t know how he would be able to find proof.

The missionary called for his assistant to bring a refrigerating device to the village.  They had the chief pour water into a container and they put it into the device and it froze.  The missionary told the chief that was the same water that he had poured into the device.  He took the ice and put it on the ground and stood on it.  The chief then had to admit that man could walk on water.

Today’s scripture is from John 6.  It comes just after Jesus feeding the 5,000.  The Bible tells us that the disciples hadn’t fully comprehended who Jesus was.  It says that their hearts were hardened.  (Mark 6:52)

Could that be like us sometimes?  Could our hearts be hardened?

Jesus discerned that the people were going to try to make Him into the king that they wanted: a king who would deliver them from the tyranny of the Roman government and just take care of things for the moment. (John 6:15)

But when Jesus appeared before Pilate, He said, “My kingdom is not of this world.” (John 18:36)

He performed many miracles including turning the water into wine at the wedding in Cana, healing the nobleman’s son, healing the man at the Pool of Bethesda, and feeding the 5,000 with two fish and 5 loaves of bread.

After feeding the 5,000, Jesus perceived that they were going to try to force Him to be an earthly king.  He instructed the disciples to go down to the boat, and He told the gathered crowd that the day was done and it was time for them to go home.

Once He gave those instructions, He turned and was quickly gone from their sight.

The Sea of Galilee

The Bible tells us that some of the disciples were very experienced with boats.  Peter, James, and John had all worked as fishermen. (Matthew 4:18-21)  They had fished the Sea of Galilee and knew what it was like and what storms were like on that sea.

That day, a storm did come up.  The disciples were in the boat about 3-4 miles out from shore.  Jesus saw them and walked out on the water to them.  Of course, they were startled when they saw Him and thought they were seeing a ghost. Had they not noticed Him, the Bible says He would have passed right by. (Mark 6:47-48)

How awful would it be if He passed us by?

When they realized that it was Jesus, Peter said, “Lord, if it is You, bid me come to You on the water.” and Jesus said, “Come.”  and Peter stepped out onto the water.

Peter walked on the water, for a little bit.  Then he saw that the storm was raging and got his eyes on the waves and he began to sink.  He cried out to the Lord and the Lord reached down and saved him.  (Matthew 14:28-31)

16 Now when evening came, His disciples went down to the sea. 17 They got into a boat and went across the sea toward Capernaum. It was now dark, and Jesus had not come to them. 18 The sea was stirred up because a strong wind was blowing. 19 So when they had rowed about three or four miles, they saw Jesus walking on the sea and coming near the boat. And they were afraid. 20 But He said to them, “It is I. Do not be afraid.” 21 Then they gladly received Him into the boat, and immediately the boat was at the land to which they were going

The Lord performed a miracle.  He can do that if He wants to.  `

We have to face life without the physical presence of Jesus near us.  His spiritual presence is always with us.

Remember what He said to Thomas?  “Because you have seen Me you have believed.  Blessed are those who have not seen, and yet believed.”  (John 20:29)

That includes you and me.

We have to go through life without having Jesus’ bodily presence with us like He was in that time; Just like he wasn’t physically present when the disciples were out on the Sea of Galilee.

We have to face life.  We have to be aware of His spiritual presence and by faith realize that He is with us.

Sometimes it seems like He’s not around, and we wonder what’s going on.

Call on The Lord in the Storm

Storms of life come.  It’s not always sweetness and light.  Sometimes there are difficulties.

The prophet Jeremiah was thrown into a well by evil men who wished him dead.  There was mud and silt at the bottom and he sank down.

Another man heard about his situation and asked the king to free Jeremiah.  The king agreed and the man took some of his staff and lifted Jeremiah out of the mud and saved him.

During the dark times of life, you can call upon the Lord.

The disciples called on Him when they were in the midst of that great storm on the Sea of Galilee.

Call on The Lord When You Are Sinking

Peter’s lack of faith caused him to sink just after he witnessed a spectacular display of God’s power.

Depression can often come just after a great victory.

When Peter began to sink, he knew to call out to the Lord.

Elijah the prophet had a great victory over the prophets of Baal.  Fire came and consumed the altar that had been soaked with water. (1 Kings 16:18-40)  Many of the false prophets were eliminated.  But after that, Elijah was concerned and the depression set in.  (1 Kings 19:4-8)

Peter was on top of the water but began to sink.

You’ve probably had ups and downs in your life.  Perhaps in some of the low points, you’ve begun to sink a little bit.

I’ve got good news for you. God still loves you!  You can still call upon Him and He will reach down and pull you up.

God is powerful, and He cares about everyone. We do need to face life as it comes and do the best we can.

Trust God and His Timing

When Jesus and Peter got back in the boat, Jesus decided that it was immediately time for them to get to the other side, so they arrived there immediately.

Sometimes, God will make the change just that quickly.  Not always.  Sometimes we have to go on through the storm.

Trust God and His timing.  Sometimes he does things quickly and immediately.

We know this: we struggle in this body of sin and death, but one day we will pass from this life and when we do, we will be changed immediately, in the twinkling of an eye!  Mortal will put on immortality and death will be swallowed up in victory. (1 Corinthians 15:51-55)